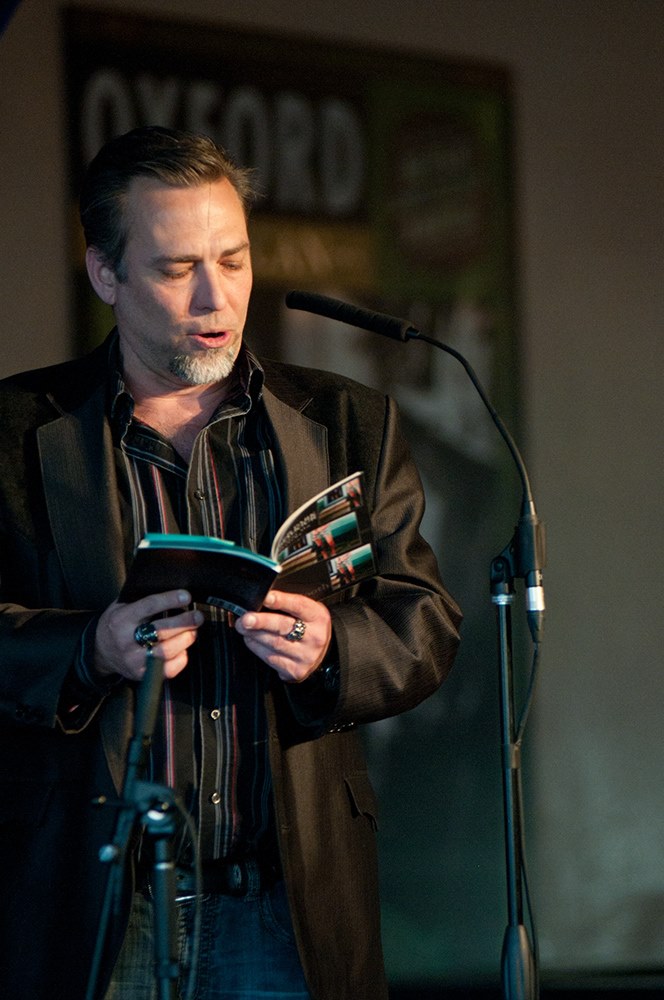 Join us in welcoming poet Justin Booth to our small house!

Justin lives in Central Arkansas and would rather live nowhere else. He involves himself in anything arts related when he’s able, saying the way the arts community here fosters artistic expression rivals any bigger arts scene.

A former drug addict and state prison inmate, Justin gives poetic voice to the often ignored urban South. He talks of the beauty in the ugliest places, the despair of absolute poverty and the redemption of the human spirit. His plain spoken style and hypnotic use of meter allow us to join him in a bittersweet journey that takes us places we have never been before.

We are pleased to partner with him in publishing his latest work: “The Singer, The Lesbian, and the One with the Feet: 69 Bipolar Love Poems.”

Justin Booth: I suppose no place really new – the arms of a woman, maybe the bottom of a bottle. Really, though, I have always tried to see the beauty all around me, even if I slept outside the Sally or was locked up.

CBP: Who inspired your latest work?

JB: Many women did. The truth is I met someone and fell in love with her just after freeing myself from IV drug use and living on the street. She was and remains very special to me. She married another and many of the poems focus on her or the half dozen girls that came after her while I was trying to get through the heart ache.

CBP: What is your earliest memory of poetry?

JB: Poetry has always been a part of my life. My father was a preacher – a great speaker and great writer in his way. The Bible itself has the oldest poetry written in Job. We were all readers in my family. I cut my teeth on Dr. Suess and other popular works. But the first poem I remember having a profound effect – well a couple – “Dreams” by Langston Hughes and “Old Age Sticks” by Cummings. In my sophomore year of high school we had this short poetry section in English and those two poems really resonated with me. Later in college, I was turned onto Bukowski by a cat named Scott Murphy. That was all I needed to know what I was meant to be.

CBP: You consider yourself the luckiest man, often using #theluckiestman on social media. Why?

JB: There are so many reasons. Of course, anybody would be lucky to be me. I have a new book, a great publisher, and I am gaining recognition in bigger and more important markets. Women enjoy my company and the most beautiful bartender in Little Rock pours my liver-killing drinks of top shelf bourbon. The fact that all of this is true and less than five years ago I was a homeless junkie who slept on the sidewalks outside of the Salvation Army gives me dibs on the ‘est.’

← Falling for Festivals
‘The Singer, The Lesbian, & The One With The Feet’ review by Angela Rose →