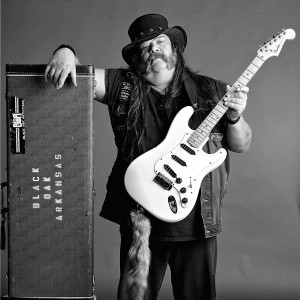 That Bookstore in Blytheville will host the first book signing for Evil Thingies, our latest book release! The book is a fantasy tale written by Rickie Lee Reynolds, an original member of Southern rock band Black Oak Arkansas. The event will take place at 1 p.m. Saturday, March 5, at 316 W. Main St. in Blytheville.

After more than 50 years of touring the world, and still going strong, Reynolds has transformed what once were bedtime stories for his daughters into a novel filled with adventure, good vs. evil, humor and even love. “I began planting the small seed that would become this book as far back as the 1990s,” he said. “I would tell little snips of it as a bedtime story to my daughters and then leave them hanging as to what would happen next. It made them anxious for bedtime instead of fighting it for late-night TV.”

During the winter months when Black Oak Arkansas wasn’t touring as often, Reynolds put down on paper what he’d been “babbling about” to his daughters all those years ago. Evil Thingies takes readers on a wild journey as they explore how everyday people pull their inner strengths together to save Earth from annihilation. The most evil character – named “HE” – represents the bad man faces every day, in every country, in every religion. “It’s the kind of bad that you can’t negotiate with and must stop whenever possible,” Reynolds said. “HE is only one of a race of beings seeking a toehold into other worlds, but HE is evil with ambition. This cannot and will not be tolerated – in fantasy or in real life. The worst thing man can do is nothing when evil shows its face.”

About the Author
Born Oct. 28, 1948, in Manila, Ark., Reynolds spent his younger years in California. His family moved back to Arkansas during his teenage years. In the small town of Monette, Ark., he entered into what would become a lifelong friendship with a classmate named James “Jim Dandy” Mangrum. After 53 years of playing music together in Black Oak Arkansas, they have achieved three gold and platinum albums and one gold single for “Jim Dandy to the Rescue” – the recording of which was inspired by Elvis. The band has donated hundreds of thousands of dollars to charities, not only in Arkansas but also across the nation. After writing hundreds of songs and two poems, Reynolds has turned his hand to being an author. He lives in Memphis, Tenn., with his dog, Dollie, and son Nick.