You are here: Home > Never out of style 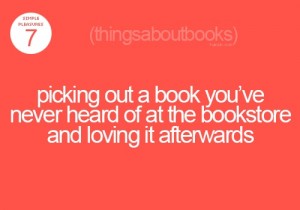 We received the below OpEd piece via email and thought it worthy of sharing. After attending the Arkansas Literary Festival this past weekend, we’ve had books and publishing on our minds – even more than normal as we assess our methods in a niche market. We distribute some in bookstores but mostly online, including this website. Is it better? Worse? Or are we just keeping up with the current trends? We love that serendipitous moment of stumbling upon that perfect book in the store, as the writer points out below. But now the survival of traditional bookstores, even big-box ones like Barnes & Noble, is threatened. Books being available in discount retailers such as Wal-Mart and Costco might be to blame as well as the Internet. So what does this mean for independent publishers like us? We heard positive feedback about self-publishing and indie companies over the weekend, and after reading this piece, it looks like the indie world is one to be in – a good thing for us and you. Where people find their next read and in what format is what has evolved. The silver lining is people are still reading.

If anyone gives you a Barnes & Noble gift card, be sure to cash it in by the end of the year.

This may be the last year that Barnes & Noble bookstores remain open.

It’s bad news for people who love books. It’s worse news for the next generation of readers, who may never experience buying a book in a bookstore.

B&N has been closing about 20 stores per year since 2012 and has said it will continue to do so for the next several years. But its financial position is bleak.

This follows a decades-long period of expansion, moving into neighborhoods where privately-owned bookstores thrived, destroying those stores with cut-price best-sellers, and all but owning the book business.

Borders collapsed because of poor choices — weak locations, an overemphasis on music, and, worst of all, selling off its online bookstore to Amazon for $20 million in the 1990s. Chump change, by today’s standards.

So why is B&N on the ropes if it has virtually no competition today from chains or privately owned bookstores?

First, Amazon makes it so easy to buy books.

Second, publishers thrashed B&N by selling best-sellers at deep discounts in non-traditional outlets such as supermarkets, Wal-Mart and Costco, thus removing a key source of revenue for the chain.

Third, the woefully underfunded Nook is competing with Amazon’s Kindle, which is like bringing a knife to a gunfight.

Fourth, the antiquated model of printing books on spec, putting them on trucks, and crossing your fingers that they’ll sell doesn’t work in the internet print-on-demand era.

And fifth, book buyers want decent customer service. At B&N these days, the only way to find a sales clerk is to attempt to shoplift.

The company that owns QVC nearly bought B&N a couple of years ago, presumably to sell low-cost jewelry and other tsotchkes in B&N’s nationwide chain of stores.

That would have been hello collectible coins and bye-bye books.

Now, one of B&N’s key investors has cut the level of its financial stake in the company. A wise move, alas.

In many B&N stores, it’s actually hard to find books. You’ve got to wade through toys, umbrellas, Nook displays, chocolate bars, notebooks, birthday cards, and all kinds of other stuff that has stolen shelf space from books.

The publishers have to be running scared. If B&N suddenly shutters its doors, then billions of dollars of books, which the bookstores take on consignment, go into the limbo of bankruptcy court.

But the fate of B&N weighs most heavily on readers. Literary agent David Vigliano says that the disappearance of bookstores, and the move to buying books on Amazon, represents the death of browsing.

Serendipity — the sweet surprise of happening upon an unexpected book — is an experience that can happen only in a bookstore.

Yes, Amazon’s algorithms can point you to books you may like, but there’s no substitute for wandering the aisles of a bookstore, looking into a section you might never have visited before, and finding a new author or subject you had never considered.

That experience is on the verge of disappearing. Barnes & Noble killed privately owned bookstores, and Amazon and technology are killing B&N. It’s downright Darwinian.

Can B&N hang on through the holidays? Most likely. But sad to say, once Black Friday gives way to the 12th day of Christmas, a once-proud book chain may well have reached its final chapter.

And that would be chapter 11, of the Bankruptcy Code.

New York Times best-selling author, “Shark Tank” contestant and “World’s Greatest Writing Teacher” Michael Levin runs www.BooksAreMyBabies.com, the portal to the ultimate 200+ video channel on writing and getting published. Levin has written more than 100 books, including eight national best-sellers; five that have been optioned for film or TV by Steven Soderbergh/Paramount, HBO, Disney, ABC, and others; and one that became “Model Behavior,” an ABC Sunday night Disney movie of the week.